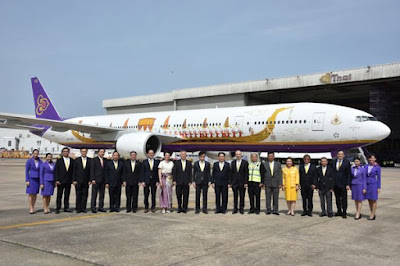 Mr. Sumeth Damrongchaitham, THAI President, said that the Royal Coronation Ceremony 2019 was held on 4 May 2019, with celebrations to continue until 4 May 2020. THAI, as the national carrier under the Ministry of Transport, has organized activities to commemorate the Royal Coronation as an expression of loyalty and honor.  THAI received permission to paint the Suphannahong Royal Barge aircraft livery on its Boeing 777-300 aircraft, royally bestowed the name “Lahan Sai.” The Royal Coronation Emblem will appear on THAI's aircraft throughout the Coronation Year.

The Suphannahong Royal Barge, originally called “Si Suphannahong” or “Chai Suphannahong Royal Barge,” has been the King's royal barge since the Ayutthaya era.  The current Suphannahong Royal Barge was constructed by the royal command of King Rama V and was completed in the reign of King Rama VI.  At the front or bow of the barge is a golden swan figurehead, the body or hull is the body of the swan etched in wood and decorated with gold leaf, mirrors, tassels, and engraved glass. The exterior of the barge was painted black, while the interior was painted red, with a throne in the middle of the barge for the monarch or royalty.  The Royal Barge was 46.15 meters long, 3.17 meters wide, and 15 tons in weight.  Furthermore, this Royal Barge will be used in the Royal Procession for travel along the Chao Phraya River to Wat Arun Ratchavararam (Temple of Dawn) to present robes to Buddhist monks during this year's annual Royal Kathin Ceremony in October 2019.

In 1999, THAI first painted the Suphannahong Royal Barge aircraft livery on its Boeing 747-400 aircraft royally bestowed the name “Haripunchai” on the auspicious occasion of the Sixth Cycle Birthday of King Rama IX.  Therefore, the sacred ceremony is being held to bless the Suphannahong Royal Barge aircraft livery that is painted on THAI's Boeing 777-300 aircraft that was royally bestowed the name “Lahan Sai,” which will appear on the aircraft from August 2019 to 31 December 2022.   This livery differs from the previous one, as there is a rowing team with oars raised symbolic of birds in flight.  A sticker (decal) has been used in place of aircraft paint spray for a more realistic appearance.

THAI's Boeing 777-300 aircraft, royally bestowed the name “Lahan Sai,” is equipped with a total of 364 seats, 34 seats in Royal Silk Class and 330 seats in Economy Class.  This aircraft will be operated on roundtrip flights from Bangkok-Seoul, Taipei, Beijing, Singapore, Kuala Lumpur, and Sapporo to promote Thai culture worldwide through the Suphannahong Royal Barge aircraft livery. 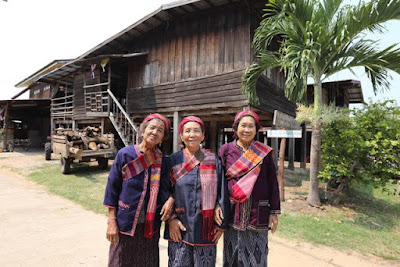 Bangkok – Thailand along with Indonesia, Mexico, Taiwan and India are the top five countries where locals believe hospitality to be in their DNA, according to the research that Booking.com conducted on 21,500 travellers from the 29 countries.

Thailand stood out from among the 29, with Thai poll respondents confident their country had the ‘host’ factor being recorded at 85 per cent.

Booking.com described Thailand as “the perfect destination for travellers seeking to experience a warm welcome and immerse themselves in the local culture”.

This follows on from an October-November 2018 survey in which the travel e-commerce company – one of the world’s largest – discovered that nearly a quarter of global travellers planned to stay in different types of accommodation in 2019 and that Thailand was well placed to capitalise on this trend.

“In 2019, travellers are looking for new experiences and unique accommodation like a Thai traditional house, boat or tree house. Meanwhile, they’re looking to live like a local by staying at alternative accommodation types; such as villas, holiday homes and apartments”.
Posted by rodeime at 9:27 AM No comments:

The Tourism Authority of Thailand (TAT) is working together with local stakeholders and tourists on Ko Samui to eliminate the use of single-use plastics and encourage all to reduce waste, reuse and recycle to help protect the island’s ecosystem.

Local Thai authorities on Ko Samui are proactively campaigning for recycling and waste management. It is urging residents and business operators to separate their waste for recycling to reduce the amount of garbage produce on the island. With some of the most stunning landscapes in Thailand, it is no wonder that visitors to Ko Samui continue to increase at an astonishing pace. With this influx comes a need to find a balance between the competitive, high-level service and environmental impact. Fortunately, as attention has turned to exploring ways to preserve Ko Samui’s delicate ecosystem, travellers can give back to the local Thai community by creating less waste and leaving a minimal holiday footprint.

Local stores and shops on the island are campaigning against single-use plastics. Hotels and resorts, as well as tourism-related businesses on Ko Samui, are also helping to lead the way on responsible waste management by following the three ‘R’ principle: reduction, reuse and recycle. Luxury resorts on Ko Samui were among the first to use the plant-based straw revolution that is sweeping across Thailand and make their tourism operations more sustainable.

Posted by rodeime at 9:39 AM No comments:


Bangkok – Travel Weekly UK has unveiled the results of its ‘Best Destinations in The World’ survey and Thailand has made it into the top 10 of four important categories.

Travel Weekly polled a cross-section of experienced agents, including independents, online travel agents and others to compile a comprehensive shortlist of 20 destinations in each category. Readers were then allowed to vote for their top destinations in each sector of the survey with over 500 agents participating over the course of four weeks.

The survey asked if there was any better place to pamper yourself? The answer to that was of course no. Thailand is an ascending global leader in the booming spa and wellness sector. Holistic wellness, Ayurveda, and acupressure is all part of Thailand’s current spa culture. While classic Thai massage continues to hold sway, there are heaps of spa packages and wellness retreats to make them affordable for most budgets.

See more at TAT Newsroom
Posted by rodeime at 4:44 PM No comments:

The Tourism Authority of Thailand (TAT) recently upgraded its Amazing Thailand and Tourism Thailand mobile apps to ensure accurate and timely travel information at the fingertips of local and international tourists.

Mr. Yuthasak Supasorn, TAT Governor said, “New innovations have been incorporated into the Amazing Thailand and Tourism Thailand, two of our four existing mobile apps, which give travellers instant facts and data on general tourist information or more niche services. This is part of our drive to improve the visitor experience whether they’re here for sightseeing, shopping, dining or health. We aim to constantly adapt to the way modern travellers seek services online and meet their expectations.”

Both the Amazing Thailand and Tourism Thailand mobile apps are now boasting new features including maps, GPS and 360 VR images of destinations to enable users to easily find attractions and gain preliminary impressions of places of interest. Information can also be shared via e-mail and other social media platforms and e-mail.

In addition, the Amazing Thailand mobile app also enable users to ‘speak Thai’ via an English-to-Thai translation dictionary, which can be voiced operated allowing tourists to find words they need to communicate with Thai people, shop owners and food sellers.

TAT also has two other apps for specific groups of travellers. The Muslim Friendly Destination mobile app lists Muslim friendly venues and includes features; such as, a Qibla compass and prayer times. Meanwhile, the Women’s Journey Thailand keeps female travellers up to date with all the latest offers and promotions in dining, sport, health and beauty.
Posted by rodeime at 4:03 AM No comments:


When Adelaide University student Nikki Lohitnavy returned to her native Thailand after graduation, she received a surprise gift from her parents - her own winery! The first (and only) Thai national to receive a Bachelor degree in Oenology (with Honours in Viticulture) in Australia, Nikki is now head winemaker at the family-run vineyard GranMonte, located in the beautiful Asoke Valley in the foothills of Khao Yai National Park.

"When I returned from Australia, I found all these steel tanks waiting outside. I then had to set up the wine-making facility from scratch. There are some things they just don't teach you at university!" she jokes.


Fast forward six years, and Nikki is arguably Thailand's most respected winemaker, consulting for international vineyards as well as leading Thailand's charge to produce world-standard wines. She is also the only female winemaker in the country, and a great inspiration for other ambitious young women.

Nikki has inherited her passion for wine from her father Visooth, who first purchased the 16-hectare former cornfield in 1999. At the time, there were several small vineyards in the Khao Yai area, a Royal Project established decades earlier having already recognised the area's potential as a wine-growing region.

Of course, producing grapes in the tropics requires adaptation of traditional growing methods; but through experimentation, consultation and the use of a microclimate monitoring system, Visooth soon learnt what varieties would flourish during tropical storms, monsoons and searing summer heat.

Things really took off, however, after Nikki returned to Thailand with internships at Browns Brothers and Wolf Blass wineries under her belt. The vineyard now has the capacity to produce 120,000 bottles a year, which it should meet within two or three years.

And trust me, GranMonte makes a fine drop, from its rich, award-winning Syrah, to its light and fruity rose made from Syrah grapes, named after Nikki's mother, Sakura. The wines have won over 100 awards in the past four years, and are the most decorated wines of Thailand.


As Khao Yai has become more popular as a weekend escape from Bangkok, so the winery has flourished into a full-blown tourist operation, with a stylish cellar door and tasting room, a charming restaurant serving delicious European-style food and a guest house offering seven rooms. Sixty thousand visitors pass through the cellar doors annually, with around 10,000 of those joining a winery tour.

Tours are held three times a day, and include wine tasting at a cost 270 baht per adult. 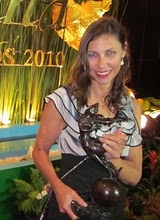